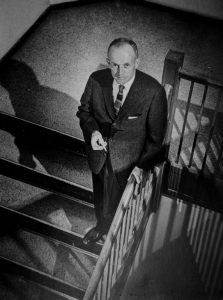 Walter Sanders came to the University of Michigan in 1949, returning to the hometown where he was born in 1908. His joining the faculty initiated a long and distinguished career as teacher, practitioner and theorist of architecture. He was brought onto the faculty at just the moment when the shift to modernism redirected the program toward artist-teachers who were also practitioners interested in problems of construction, the use of technology and the new building materials coming onto the market. In fact, he and his colleague, C. Theodore Larson, were recommended by a select committee charged with finding leaders in modern design and practice.

By 1949, Walter Sanders had started up two architectural firms, Sanders & Breck (1938-1942) and Sanders, Malsin and Reiman (1946-1950), and he had been an associate editor at American Architect and Architectural Record (1936-1938). His training at the University of Illinois (B.S. 1929) and M.A. from the University of Pennsylvania in 1930, led to stints of teaching at Columbia University (1930-1936) and Pratt Institute (1939-1940). He was also an internationalist. On the theoretical plane, Walter Sanders’ involvement with CIAM (Congres Internationaux d’Architecture Moderne) brought him into relationship with the great European modernists, like Le Corbusier and Luis Sert. This organization held periodic conferences between 1929 and 1959 in its effort to clarify the principles of modern architecture. Its ideas informed Sigfried Giedion’s influential textbook, Space, Time and Architecture: The Growth of a New Tradition (Harvard University Press, 1941), that derived from his Charles Eliot Norton Lectures at Harvard in 1938-1939. By 1950, this history of architecture was the newest and most popular of texts among younger architects.

Walter Sanders is credited with four Mid-century Modern (MCM) houses in Ann Arbor. The Ann Arbor News covered the Oscar A. Eberbach house at 2250 Belmont Road, built in 1952, the headline reading, “Simplicity of Design Achieves Complete Livability, Easy Upkeep, Yet Preserves Structural Beauty.” Two others are to be found at 2020 and 2021 Tuomy, also in Ann Arbor Hills, both experiments in building small, efficient houses in a suburban setting.

And there is Walter Sanders’ own house at 99 North Barton Drive in Barton Hills (1953). His own house employed Unistrut materials and went up on what was thought to be an unbuildable lot. In its way it is the prototype of the Mid-Century Modern house in Ann Arbor: it combined a challenging site, the use of new materials, and catered to the client’s specific desires, with the architect designing a unique house for a specific client.

There is a story connected to this house, however, involving new research work conducted by Theodore Larson. At first Walter Sanders planned to use a design (by the office of Sanders, Malsin and Reiman) published in Ladies Home Journal (September 1951). The design permitted easy owner construction and boasted that its $20,000 cost could be cut to $9,175 by owners ready to invest “sweat equity.” At the time, Walter Sanders said he would incorporate elements from the published design (corrugated asbestos panels and slender steel posts) in building his own house. But the success of Theodore Larson’s new Architectural Research Laboratory introduced a new material, prefabricated steel struts. The Unistrut Corporation in Wayne, Michigan, owned by a Michigan alumnus, Charles W. Attwood, had been experimenting with steel struts in the design of schoolhouses, and when Theodore Larson arrived in 1949, he arranged for the College of Architecture and Design, the College of Engineering, and the School of Education to work together with Unistrut in this endeavor. Their early designs were promising, which whetted an appetite for further research.

As an offshoot of the school building project, Unistrut authorized a further experiment with residential projects by both Walter Sanders and Theodore Larson. Some of the features of the Walter Sanders project included fiber board wall panels and windows that fit right into channels in the metal struts (no drilled holes needed). Flooring included asbestos combined in vinyl plastic on the upper level (a material that did not need to be waxed and was easy to clean) and asphalt tile on the lower level. Albert Duckek was the contractor for this experimental project. Theodore Larson built his house somewhat later (1954) also using the Unistrut space framing techniques worked out in his Architectural Research Laboratory.

Walter Sanders became chairman of the architecture department in 1954. It was during his chairmanship (ending in 1964) that the department reckoned with its move to North Campus. In 1956, the celebration of the 50th anniversary of the school of architecture initiated a serious look at the architectural legacy of the campus. The pervasive feeling was that existing buildings on campus lacked distinction, and there was anxiety about the loss of familiar but obsolete buildings. Actually, to a certain extent, the College of Architecture and Design was responsible for setting up this heightened consciousness of change, by putting up a substantial Unistrut building in 1954, snuggled in the courtyard of the old Architecture building (later named Lorch Hall). This spidery building of exposed struts and trusses was given by Unistrut to the university in 1955. As if in a statement of total rejection of the status quo, Theodore Larson had moved his office out of the Architecture building and into the Unistrut research facility. In so many ways, these old and the new structures, housing the architecture department side by side could not be more different.

Also, the growing number of MCM houses produced by architecture faculty members Robert Metcalf, Walter Sanders, Theodore Larson, Herbert Johe, William Muschenheim, Edward Olencki, Joseph Albano, Ralph Hammett, George Brigham and local practitioners, like David Osler, and others provided modern visual examples of a new style as a counterpoint to the existing Ann Arbor area buildings, residential and otherwise. In their practice and in their research, these architect-teachers and the local practitioners contributed to a schizophrenic condition within the community. Underneath this soul searching in 1956, however, was the fact of the recent demolition of the Romance Languages Building (1880-1881, 1952), a long-familiar fixture on campus, distinguished for its design and historically important as an experiment in the use of structural steel. It had survived a very long time, and it was one of two buildings by William Le Baron Jenney still standing in Ann Arbor. The question hung there: if you removed the old buildings, what should replace them?

In 1959 Walter Sanders was set to step down as chairman. Philip Youtz, Dean of the College of Architecture and Design, had four years remaining in his role, and another talented, highly competent colleague, Herbert Johe, had been appointed Assistant Dean of the architecture department in 1958. It was a good time to step aside. For whatever reasons, however, Walter Sanders was reappointed for four more years. It was just in time for a second phase of the architectural identity crisis, this one involving competition from other schools. While the planning phase for North Campus had been concluded by Eero Saarinen and Associates, Architects in 1959, there were no academic teaching facilities located there (although eleven buildings of a service and support nature, such as labs, a library annex, a pumping station and a power plant had been completed). Apparently, there was hesitation about what the next step or steps should be.

Probably to be expected, a new awareness agitated the community in 1960. Other college campuses had modern buildings by signature architects. The list included Eero Saarinen (dormitories at Yale, Vassar, University of Chicago, University of Pennsylvania; an auditorium and chapel at MIT; even an entire campus at Concordia Senior College in Fort Wayne, IN (25 buildings in all); a space saucer auditorium by Harrison & Abramovitz at the University of Illinois; Paul Rudolph’s Jewett Arts Center at Wellesley College; Edward Durrell Stone’s Stanford Medical Center and dormitory at University of South Carolina; Le Corbusier’s Carpenter Center at Harvard; the elegant McGregor Memorial Conference Center at Wayne State University by Minoru Yamasaki; even Frank Lloyd Wright had designed an entire campus (12 buildings) at Florida Southern College in the 1940s. Whereas, the newer buildings at the university—the Administration Building (called “the salmon loaf”) and the “gross object” of Mary Markley Hall, among others—did not compete with the glittering offerings of perceived architectural excellence elsewhere. When, in 1964, a new Dean and new architecture department chairman both from outside the university were brought in, the idea was to focus on a building for the College of Architecture and Design for the move to North Campus, a move that eventually took place, ten years later.

The American Institute of Architects made Walter Sanders a Fellow in 1963 (roughly 10% of AIA members held Fellowship status). In mid-1964 he received a Gold Medal from the Michigan Society of Architects at their summer conference at Mackinac Island, “in recognition of distinguished leadership in design and education and for devoted service to the profession and to the AIA.” In 1969 he received a Distinguished Faculty Achievement Award from the University of Michigan, and in that same year he was brought onto a commission to design a new building for the capital by Governor Milliken. In this year, also, he brought into being the first doctoral program in architecture in the country, and he was its first head starting in 1970. The Architectural Research Laboratory had flourished from its very beginning and now its presence was bringing recognition, research grants and advanced students to the department. The doctoral program answered the need for advanced students to have an additional two years to pursue research work begun during their pursuit of the M.A. degree. Walter Sanders was brought in again to serve as chairman of the architecture department in the fall of 1971, while Robert Metcalf was on sabbatical, and he passed away in March 1972.