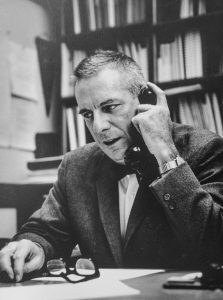 All the evidence indicates that Herbert Johe was a talented interior designer, a skillful artist with drawing and watercolor, a versatile architect, a charismatic teacher and an easy-going but nimble representative for the architecture department. Modernism had taken complete hold of the department of architecture by 1958. The houses he designed during the summer months (he was too busy during the school year to design them) show his assimilation of the forms and features of the classic Mid-century Modern house. But, as a matter of fact, he was trained in a Beaux-Arts program at the Carnegie Institute of Technology in Pittsburgh, where he was born in 1914, and he was fully respectful of this training all through his career, even as the academic community and the larger culture turned against the precepts and the buildings produced by the Beaux-Arts tradition in the US.

Three of his houses were featured in the Ann Arbor News. He and his wife together (much like Robert Metcalf and his wife in 1951-1952) built their own house at 440 North Barton Drive (1952-1954). The house at 805 Colliston Road, built in Barton Hills (1958) for a family of six, drew attention for its hinged central entrance way that joined a living wing and a sleeping wing in its 3,700 square foot plan. In 1959, together with Glenn Mastain, he designed a modest house at 1336 Glendaloch Circle in Ann Arbor Hills. In many ways, this is a sensational house, partly because it is located on a suburban lot where it is easier to appreciate its good looks; it is close to the street, while the other two houses were set back amidst the trees. He has said that the Glendaloch house was inspired by a trip to Scandinavia the year before. He was fond of this house. He designed other houses besides these three, but it was these that were noticed and listed among sites to visit on the annual tours sponsored by the Women’s City Club of Ann Arbor. His wife Sue was herself a member of the Women’s City Club. For example, the Ann Arbor News article covering the occasion of “Men’s Night” for the Ann Arbor Garden Club at Women’s City Club on January 22, 1958, made sure to note that “Herb Johe will pour.”

Herbert Johe graduated from Carnegie Tech in 1940 with both a B.A. and an M.A. in architecture. He became an instructor at the North Dakota Agricultural College in 1940 before entering military service in 1943. He was stationed in Hawaii as a planning and layout officer. With Joseph Albano and Glenn Mastain, he joined the faculty at the University of Michigan in 1947, just at the time when a new direction for the department was being formulated to bring in modernist architects. Walter Sanders, Theodore Larson and Edward Olencki were hired in 1948, and William Muschenheim and Arnold Handler (a city planner) in 1950.

At the university he taught courses in Introduction to Drawing and Watercolor Presentation: Architectural Design, Construction and Materials; Graphic Communications; and Introduction to Architecture. He was an effective and popular counselor in the department as well. He was promoted to assistant professor in 1949. An article in the Michigan Daily in 1951 reflects the changing attitudes among students regarding the old and new architecture. The subject was Lorch Hall, designed in a vaguely academic Gothic style by Emil Lorch, director of the Architecture Department from 1906 to 1936 (he retired in 1940). Architecture students were quoted deprecating the structure for its dark interior, its lack of an elevator in a six-story building, and its architectural style. A male student called it “trashy.” Dean Johe’s counter remark acknowledged this pervasive antagonism but did not condone it. His gentle riposte: “The architect apparently attempted to relate the building to the surrounding buildings.” Indeed, Emil Lorch had in mind and wished to harmonize with the key brick buildings on campus at that time in 1926-1928, which were the Martha Cook dormitory nearby and the Michigan Union and the Michigan League buildings, both with rising but modest towers. Emil Lorch was still very active in historical preservation activities on behalf of the state at this time and would have known of these new student attitudes. Recognition of his heroic effort to bring distinction to his department and to adorn the campus with an exceptional facility had been eclipsed by Depression and War, leading to this astounding reversal of esteem for his singular sacrifice and achievement. Emil Lorch stepped back from service to the Michigan architects in 1959 and passed away in 1963.

In 1952, Herbert Johe advertised a class on “Design Principles of the Home” via the university extension service. In the years in 1952-1958 he built his own and other houses, judged fraternity and sorority homecoming displays, participated on a panel to discuss “Design Tomorrow” (which looked at the future for transportation, architecture, appliances and art), supervised the construction of a tabernacle (in the form of a booth) for the Hillel Foundation to celebrate the new year, exhibited 29 of his paintings for the Ann Arbor Art Association, and spoke at several churches on the subject of church architecture.

In 1958 he was appointed assistant dean in the department of architecture. He had also been appointed to the Committee on Broadcasting by the Regents in 1958, and in 1959 his colleague, Robert Metcalf, appeared in the TV series “Dreamhouse Revisited” for WWJ, channel 4. The subject was “The Custom House,” and the show featured Robert Metcalf interviewing a couple planning the commission for a custom-built house, to demonstrate how to get down the proper needs and desires of the client and to deal with budget and land issues. The program also showed typical architectural drawings.

In 1961 the campaign to move the architecture program to North Campus began, with Dean Johe explaining that the Lorch building was inadequate. Built in 1927 for an enrollment of under 400 students, post-war attendance had reached 786 in 1961 and was sure to continue growing. In any case, it took thirteen years to accomplish the move. In 1962 he participated in a symposium titled “American Culture in Orbit.” Michigan was moving to a trimester system at this time, complicating, to an extent, summer expectations for architecture students who were expected to find summer work in architectural offices. He was placed on a series of committees looking at the idea of the university, whether to survey attitudes towards elitism, or to examine relationships between the faculty and the administration. These posts led to his appointment in 1965 as chairman of the Campus Planning and Development Committee, whose focus was the “insuperable problem of growth since WWII.”

Robert Metcalf was appointed chairman of the College of Architecture and Design in 1968 after he had brought key curricular changes to the department. His courses on building construction restored a neglected element in the education of the architect. Sensitive to the changing landscape of American life, Robert Metcalf authorized a seminar to probe “ghetto development,” bringing together faculty and students to discuss “white academia” and the “urban ghetto” to better understand how to plan for urban development. One idea was to build community centers for child-care in cities and focus not on residences and luxury office spaces but on slum conditions and low-cost housing. The department also hosted a meeting of schools in the Great Lakes region—Michigan, Washington University in St. Louis, Illinois Institute of Technology, University of Illinois at Chicago Circle, Notre Dame, Iowa and Wisconsin all of whom were members of the Association of Collegiate Schools of Architecture—to create a closer interchange of ideas. It was a time of ferment. Herbert Johe signed a letter from the architecture department calling for a moratorium on the Vietnam War.

The move to North Campus in 1974 raised up a controversy of its own. Students and faculty disliked the new building. On one side, the building was praised for being a cheap, innovative, spacious, and highly functional space. On the other side, it was costly to heat and cool, the windows were sealed (for security reasons), the large room for student cubicles was noisy and too public, faculty offices were tiny and the corridors too narrow. To save money, lighting for clusters of office spaces was controlled by one electric switch, there was no faculty-student lounge and no library. As he intuited, the building turned out to be a functional, accommodating and successful solution for its users.

In 1982, 1986 and again in 1996, Herbert Johe exhibited his work, at the Art and Architecture building and at the university museum. The first show involved 31 drawings and watercolors from his Beaux-Arts days in the 1930s. In 1986 the exhibit included drawings and watercolors from his Beaux-Arts period and new wood constructions inspired by construction kits long disused by the architecture department (he found them stashed in a closet). In addition, there were 58 watercolors painted between 1945 and 1985. He was invited to return to the department to teach watercolor presentation to students who desired it as an artistic skill. The 1996 show was titled “Beaux-Arts Visions: Architectural Renderings by Herbert W. Johe.” According to his obituary in the Ann Arbor News (he passed away on May 8, 2005) he exhibited his architectural drawings and watercolors in southeast Michigan, Florida, and Washington D.C. His wife wrote the following poem in celebration of his life:

Oh, how many people do you know in this life
Who designed a fine house and who had a great wife?
You might say, No more than a few, that’s all?
Could they then create the art to hang on their wall?
And have one-man shows in museums fine,
Of his very own creating—and people stand in line
To view his precise columns, that touch your very heart—
And see his Fibonacci, mathematically-inspired art?
And would they be witty and wise, and wouldn’t it be a myth,
A true-blue and brilliant and just fun to be with?
And have sparkling eyes of blue and a killer-diller smile—
And, hey, could you still go on and on for quite a little while?
Oh, and could he fiddle you a country tune?
Or sing you a Bach Chorale or hum some Bruckner or Mahler?
You might well wonder, was there ever a man such as he?
Well, Yes! And, of course it was Herb Johe.

By Jeffrey E. Welch
All rights reserved
May 2020

For more on this architect, read these articles from the Old News site.