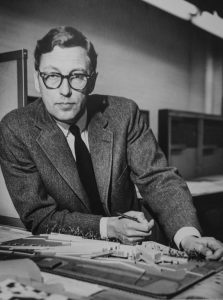 Gunnar Birkerts is an internationally acclaimed architect of the last half of the twentieth century who has been recognized for his expressive forms, his simplification of detail, his innovative work with surface materials and his effective use of indirect daylight. With his design flexibility and commitment to “finding poetry in building technology,” he has pushed beyond the boundaries of the Modern Movement. [1]

Born on January 17, 1925, in Riga, Latvia, Gunnar Birkerts’ childhood was steeped in the mythology of his country, as both of his parents, Peteris and Merija Shop Birkerts, were scholars and folklorists who studied the cultural heritage of the Latvian people. Later in his career, Birkerts expressed his gratitude for the rich, architectural and literary images of his homeland which he believed continued to stimulate his creative process.

While attending the first gymnasium in Riga, Birkerts saw an architectural rendering of an upperclassman which inspired him at the age of thirteen to pursue a career in this field. He completed two degrees in engineering and architecture in 1949 at the Technische Hochschule in Stuttgart, where his training exposed him to both Bauhaus and vernacular design. His education in the craft and technology program gave him an understanding of architectural materials and design construction methodology, which would become enduring interests throughout his career.

During his training, Gunnar Birkerts studied the work of Alvar Aalto, Gunnar Asplund, Sven Markelius and Sigurd Lewerentz in Europe and that of Mies van der Rohe, Walter Gropius, Erich Mendelsohn and Marcel Breuer, who had emigrated to the United States. William Lescaze and Frank Lloyd Wright were also of interest to him. However, it was at the U.S. Information Agency Library that he discovered and became attracted to the modern architecture of Eliel and Eero Saarinen with whom he shared northern European roots. Thus, he came to Birmingham, Michigan in December 1949 to seek work with Eero Saarinen, who explained to him upon his arrival in Birmingham, Michigan, that the General Motors Technical Center project was on hold and that no job was available for him. Carrying a letter of recommendation from Saarinen, Birkerts went to Chicago to join the firm of Perkins and Will, which specialized in school architecture. Within a year of his arrival in the United States, he married Sylvia Zvirbulis. Together they had three children, Sven Peter, Andra Sylvia and Erik Gunnar, born in 1951, 1954 and 1967, respectively.

In 1951, Eero Saarinen invited Birkerts to join his firm in Birmingham, Michigan, where he worked with such young architects as Kevin Roche, Robert Venturi and John Dinkeloo. During his four years with Saarinen, he contributed to the General Motors Technical Center in Warren, Michigan and Concordia Senior College in Fort Wayne, Indiana and was the project architect for the Milwaukee County War Memorial. In 1954, he won the young Designer of the Year Award from the Akron Museum of Art. Birkerts was highly impressed by Saarinen’s inventiveness and perseverance, qualities which he carried into his own work. He recalls that “in those days it was a battle to bring modern architecture to the world. The whole quest was evangelistic.” [2]

Birkerts received American citizenship in 1955, shortly after leaving Saarinen’s office to join Donald Grieb in Milwaukee. After one year with Grieb, he was invited by Minoru Yamasaki to work with Yamasaki, Leinweber and Associates, in Birmingham, Michigan. There he was chief designer for the Reynolds Metals Building, the Educational Building at Wayne State University and the Daharan Air Terminal between 1956 and 1959. During this time, he received a number of design awards, including two citations from Progressive Architecture for houses in Wisconsin and first prize in the Cantu, Italy First International Furniture Competition. He was especially proud of the latter because Alvar Aalto, highly esteemed by Birkerts, was one of the jurists.

In 1959, Birkerts became a principal of Minoru Yamasaki and Associates. Despite his admiration for Yamasaki’s intuitive creation process, Birkerts thought, “I had listened long enough. My apprenticeship was over. Now it was my turn to speak.”[3] Accordingly, he left Yamasaki in 1959 to establish the partnership of Birkerts and Straub. With Frank Straub as project administrator and Birkerts as designer, they produced their first independent projects, including the Schwartz Summer Residence (1960-1962) in Northville, Michigan, the Haley Funeral Home (1960-1961) in Southfield, Michigan, the 1300 Lafayette East Apartments (1961-1963) in Detroit, the Marathon Oil Office Building (1962-1964) in Detroit and the Lillibridge Elementary School Addition (1962-1963) in Detroit.

Gunnar Birkerts and Associates was established in 1963 in Birmingham, Michigan, when the architect left his partnership with Frank Straub. The 1960s were prolific years for the practice, as Birkerts designed buildings which contained the “bold forms, space before structure, minimal detailing, stratified walls and daylight in interior spaces”[4] which were the hallmarks of his work during this decade. Among his many important buildings of this period were the University Reformed Church (1960-1964) in Ann Arbor, Michigan, the Detroit Institute of Arts – South Wing Addition (1964), the Fisher Administrative Center (1964-1966) at the University of Detroit, the Lincoln Elementary School (1965-1967) in Columbus, Indiana, the Freeman Residence (1964-1966) in Grand Rapids, Michigan, the Tougaloo College Campus Master Plan (1965) in Tougaloo, Mississippi, the Tougaloo College Dormitories and Library (1966-1972) and the Federal Reserve Bank of Minneapolis (1967-1973).

During the 1970s, Birkerts continued his exploration of glass and metal as surface technologies. He was also an early advocate for the containment of urban sprawl with his Subterranean Urban Systems Study of 1974, for which he received a Fellowship Grant from the Graham Foundation for Advanced Studies in the Fine Arts. In 1970, he was elected a Fellow of the American Institute of Architects, and he received a Gold Medal from the American Institute of Architects, Detroit, in 1975. He was also honored by an appointment as Architect in Residence at the American Academy in Rome in 1976. A few of his many notable buildings of this decade are the Contemporary Arts Museum (1970-1972) in Houston, the Dance Instructional Facility (1970-1976) at the State University of New York, Purchase, the University of Michigan Law School Addition (1974-1981) in Ann Arbor, the United States Embassy Office Building (1975, project) in Helsinki, Finland, the Duluth Public Library (1969-1980), the Museum of Glass (1976-1980) in Corning, New York, and the University of Iowa College of Law Building (1979-1986) in Iowa City.